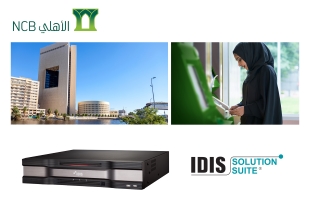 An advanced, hybrid surveillance upgrade for Saudi Arabia’s National Commercial Bank (NCB) has earned IDIS and its integration partner Almajal G4S a place in the finals of the 2019 Intersec Awards.

The project is one of the biggest financial surveillance system upgrades ever seen in the region encompasses a vast geographic footprint of 400 branches and 2580 ATMs. The first phase which was completed earlier this year involved a complete control room upgrade and the installation of 900 IDIS pinhole cameras, 900 IR domes and 900 IR bullet cameras at ATM locations plus a mix of indoor and outdoor IR domes and bullet cameras at 150 branches.

The bank, which is the second largest in the Arab world, chose the advanced IDIS technology to enable compliance with the latest resilience and cybersecurity standards.

The project involves a carefully managed migration from older and difficult to maintain analogue tech to a hybrid system powered by the IDIS Solution Suite VMS, with rapid, plug-and-play installation avoiding any interruptions to ongoing surveillance.

IDIS, which is the largest manufacturer of surveillance technology in South Korea, will also provide an end-to-end solution for further upgrades, allowing NCB to keep pace with the latest standards required by the Saudi Arabian Monetary Authority (SAMA) and Ministry of Interior (MOI).

“NCB wanted a solution offering the advantages of the latest IP technology while supporting its existing analogue infrastructure,” says Harry Kwon, General Manager, IDIS Middle East and Africa. “They also asked for a phased migration and needed to ensure that, during the upgrade, there would be no gaps in footage that could result in penalties or difficulties investigating incidents. IDIS Solution Solution Suite met those requirements.”

IDIS DirectIP® technology also made the solution more efficient to install, with less time required to connect cameras and NVRS eliminating the need for engineers to manage 1000s of passwords. This not only improves cybersecurity but makes the job much faster and more affordable than a complex, server-based system, adds Harry Kwon.
And IDIS’s For Every Network (FEN) peer-to-peer technology allows engineers to connect devices easily without in-depth knowledge of routing or networking – a major help for this project involving remotely located ATMs and an extensive network of bank branch locations.

These features will continue to benefit engineers in the next phases of the project, which are either planned or underway and will see IDIS full-HD IP surveillance deployed across NCB’s entire estate well ahead of the SAMA deadline of 2021.

The award finalists are assessed by an independent judging panel, with three rounds of review, including face-to-face interviews. The winners are due to be announced on September 11 2019.