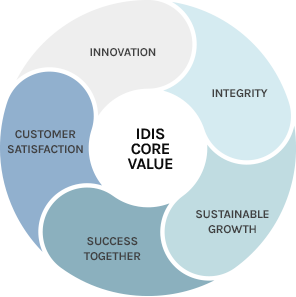 We only succeed when our customers and partners succeed. Our people demonstrate dedication to every customer, from the largest enterprise to the smallest organization, and we do business in an open, direct, and sustainable way. One of our most important roles is as an employer, and through robust, sustainable growth, we create new jobs and invest in those who already work for us.

IDIS designs, develops, manufactures, and supports its products and software all under one roof. For customers and partners, this means they can build a complete surveillance solution using products that seamlessly integrate from just one vendor. This simplifies the buying chain and provides local sales and technical support from a single vendor. Whether a large corporate enterprise, a retail chain or single site, IDIS has a surveillance solution that meets the needs of an extensive range of businesses. With a broad lineup of one to 12 megapixel (MP) IP cameras, four to 64 channel NVRs, monitors, network accessories, a choice of video management software (VMS), and our DirectCX lineup for customers looking to leverage existing coax cabling, IDIS has a solution that fits.