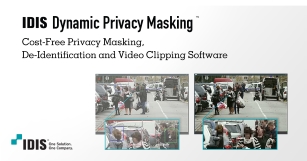 IDIS now offers a simple answer to the previously labour-intensive – or prohibitively expensive – problem of de-identification in video footage which is being submitted in response to requests for access under The General Data Protection Regulation (GDPR) or for evidential purposes.

Last year GDPR gave the right to any person captured by a video surveillance camera to access a copy of their personal recorded data. But at the same time companies are required to protect the identity of other individuals who feature in the recorded video, with anonymisation and masking.

The same de-identification also needs to be applied when providing video clips to the police and courts for use as evidence.

Jamie Barnfield, Sales Director at IDIS Europe, says that many small to medium companies – for example, retailers and eating-out chains - are struggling to manage their recorded video footage. They are under pressure to provide police with GDPR-compliant video for incident investigations, to respond to freedom of information requests from the public, and to supply footage to insurers assessing claims including as slips, trips and falls. In all of these cases the video needs to be redacted, Barnfield points out.

“GDPR came into play during a challenging time and some users have stopped reporting smaller losses and petty crimes because of the increased work involved.

“For others the alternative has been to resort to expensive video cloaking services that charge by the minute, or to use third-party redaction software not budgeted into the running costs of their surveillance operations,” he said.

Solving this problem, IDPM is now available from the IDIS Partners Portal as a direct download. It allows authorised system users to blur sensitives areas and dynamically de-identify faces, vehicles etc. Crucially, IDPM does this automatically for the duration of the clip, even as the object or person moves around the scene. Users can then quickly save video as clips or project files via the IDIS Clip Player which, crucially, does not rely on transcoding to prevent forgery.

As a result, masking can easily be removed later by the authorised user without affecting the integrity of the footage, if that becomes necessary for a subsequent investigation. Users also have options to set passwords and expiration dates, and to control who can access and play video files.

“IDPM now gives users a simple, fast and intuitive tool to provide evidence to the police and courts so that theft, abuse and violence against staff can be investigated and criminals brought to justice. At the same time companies can respond, within the stipulated timeframe, to information requests in line with GDPR without additional costs,” added Barnfield.

IDIS TO FOCUS ON VIDEO SURVEILLANCE CYBERSECURITY AT IFSEC